Sonita is an 18-year-old female, an undocumented Afghan illegal immigrant living in the poor suburbs of Tehran. She is a feisty, spirited, young woman who fights to live the way she wants, as an artist, singer, and musician in spite of all her obstacles she confronts in Iran and her conservative patriarchal family. In harsh contrast to her goal is the plan of her family – strongly advanced by her mother – to make her a bride and sell her to a new family. The price right now is about US$ 9.000. 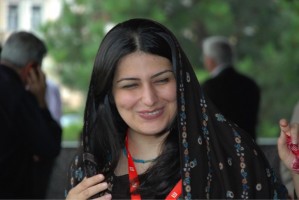 Rokhsareh Ghaem Maghami studied filmmaking and animation in Tehran Art University. Her research on animated documentary resulted to writing a book, named: “Animated Documentary, a New Way to Express”. She has made 6 documentaries and won more than 20 international awards. Cyanosis (2007) and Going up the Stairs (2011) have a wide international exposure.