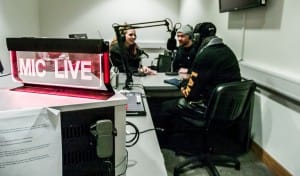 Media students at DKIT at work in the radio studio

The partnerships, says festival producer, Sarah McCann, will build on existing collaborative educational programmes with film and media students at both colleges.

Sarah McCann, Head of Section of Creative Media at DKIT and producer of this year’s film festival, described the partnerships as a key objective of the Guth Gafa International Documentary Film Festival.

She pointed out that the relationship between both institutes and the Guth Gafa festival have been strengthened over the years with Guth Gafa taking part in a Development Education event in Maynooth University last December with A Goat for a Vote (a popular film from last year’s festival) while the festival’s relationship with DKIT has developed over the last number of years through the Next Generation Student Competition, won by DKIT students in 2013.

“As an educator working in a third-level environment for over a decade, I see such partnerships and the possibilities they can bring as fundamental to the future development of the Guth Gafa Festival as not just a one-off event each year, but as an organisation with an ongoing educational remit and responsibilities to inform the local community about key human rights and social issues.”

Welcoming the announcement, Professor Maria Pramaggiore, Head of Media Studies at Maynooth University said her department was thrilled about the possibilities it offered students.

Maynooth students learn the theory and practice of documentary in our classrooms; being closely involved with Guth Gafa allows them to gain the festival experience and make the important industry contacts that will round out their media studies education and launch them into their creative futures.”

Our picture shows media students at DKIT at work in the radio studio.